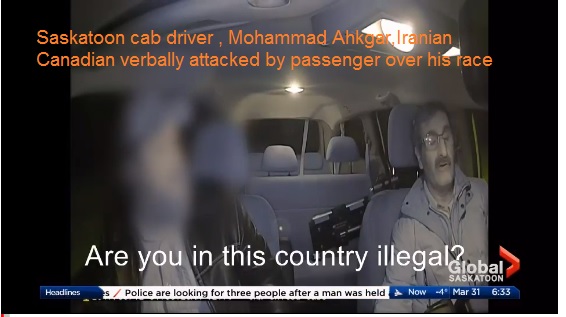 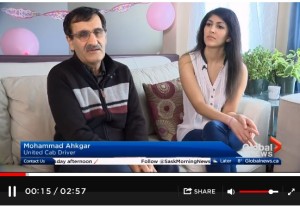 Saskatoon cab driver verbally attacked by passenger over his race

Mohammad Ahkgar, a 65-year-old cab driver for United CabBy in Saskatoon, said a recent verbal attack on him was shocking, but it’s not the first time it has happened to him.

Ahkgar, who is originally from Iran, recently endured some nasty questions and comments that focused on his race.

Global News has obtained the unsettling video of the passenger

“I had this happen many times, but not the same,” Ahkgar said.

“This guy, he ask me, are you citizen? Are you paying tax? Something like that.

“I was scared because I was alone. Nobody around me at that time to help me, really I was under stress.”

It began in the early morning of March 12 when Akhgar picked up a man from the Canadian Brewhouse.

It started out friendly enough, but quickly, turned sour.

The man started asking for Akhgar’s identification, even though the taxi licence is displayed on the dash.

He then began questioning Akhgar’s legal status in Canada.

The passenger then called police.

Akhgar sat quietly to the side as the man refused to leave the cab.

Global News has spoken to the passenger in question and showed him the footage but he has given no comment.

“It was disturbing. I couldn’t finish the video,” Morv said.

“It was just sad, especially when it’s your own family member. My dad’s 65 years old, he’s so innocent.

“It was definitely really hard to watch.”

Mohammad was an accountant in Iran and moved to Saskatoon 21 years ago.

He became a Canadian citizen in 2002.

His family says he encounters incidents such as this at least once a month.

“My father cannot help the fact that he was an older immigrant coming into the country and having an accent,” Maryam said.

“He can’t apologize for his skin colour or what could be associated with people’s perception of what a Muslim immigrant is like.”