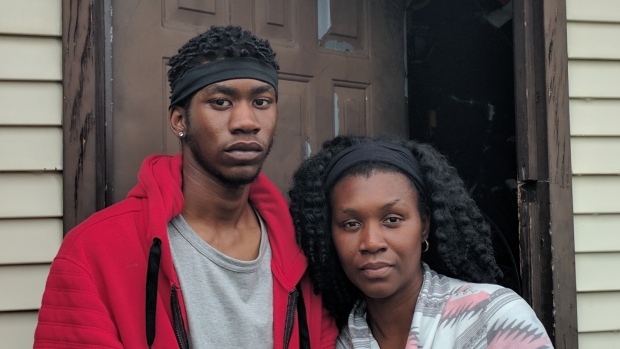 آخرین اخبار اخبار کانادا
ژوئن 29, 2017ژوئن 29, 2017 Freelance Journalist 0 Comment
دانش اموز سیاه پوست توسط پلیس مونترال در حالیکه اسلحه روی شقیقه اش گذاشته شده بود دستگیر و  9 ساعت در بازداشت بود ، وی اشتباهی دستگیر شده بودولی پلیس معذرت خواهی نمی کند . . مالک  اسمیت  می گوید رفتا رپلیس نژاد پرستنه بوده است
ایرکانیوز_ irca News- چهارشنبه 28 جون 2017 – 8 تیر 96
Quebec man says he was wrongfully arrested at gunpoint, blames racial profiling
پلیس می گوید تلفنی شکایت در مورد تیراندازی داشته اند و در محل ، این جوان را در ماشین خود دیده اند که سیگار می کشیده است . وی را دستگیر و به نیروی انتظامی برده و 9 ساعت نگه داشته اند .
پلیس می گوید صدای تیراندازی نبوده است و صدای انفجار ناشی از کابل برق بوده است که یک همسایه در مورد صدای گلوله به پلیس تلفن کرده است .
مالیک اسمیث می گوید پلیس ها که وی را در خانه اش دستگیر کردند ابتدا از گفتن اتهام وی خودداری می کردند وقتی وی گفت این کار انها نژاد پرستانه هست انها به وی خندیدند .
Quebec man says he was wrongfully arrested at gunpoint, blames racial profiling
Local police force confirm a man was arrested after 911 call about a suspected gunshot
By Verity Stevenson, Salim Valji, CBC News
As Malik Smith opened his front door and stepped out of his home in Saint-Constant, Que., last Wednesday morning, he was met by a formation of police officers pointing guns at him.
He says he counted 12 squad cars and nine officers who had pistols pointing at him, and another officer across the street with an assault rifle pointed in his direction.
“I think about it every day … I haven’t been eating right; I haven’t been sleeping right,” Smith says. “I just have the picture of the squad cars all there, and them telling me to freeze with their pistols pointing at me.”
Smith, 20, says he was arrested and held alone in a jail cell for nine hours. He was ultimately released, but says he was left emotionally scarred and feels he was racially profiled.
Black driver of Mercedes arrested in ‘egregious’ case of racial profiling, Montreal rights group says
Victims ‘baffled’ Montreal police still not tracking racial profiling complaints
Police confirm they received a call about a possible gunshot in that area and made an arrest, but released the man after determining it was an electrical problem that caused the noise.
Police laughed at racism allegation, Smith says
Around 9:45 that morning, Smith was smoking a cigarette in his car, parked a couple of blocks from his house so his parents wouldn’t see. They didn’t know he smoked.
He says a man taking out his garbage asked him if he was waiting for someone. Smith said he wasn’t, and drove back home soon after. He played video games for an hour before heading out the door and encountering the police, who arrested him around 10:45 a.m.
Smith says his house was searched and that he was told by police that someone had called 911 to say that a man in a suspicious vehicle had fired a gun outside his home.
While Smith was being handcuffed, he told police they were being racist. He says they just laughed in his face.
malik-spaulding-smith-racial-profiling-arrest
Police searched the home after arresting Smith, who was on his way to school. A neighbour reported hearing a gunshot, which turned out to be an electrical problem. (Salim Valji/CBC)
“At first, they didn’t tell me what I was being charged for,” he said.
Later, an officer told him he was facing charges of intimidation and possession of a weapon, he says. He was released Wednesday at 8 p.m.
A spokesperson for the Roussillon police force said officers responded to a call of a possible gunshot in the area of Laforet Street, but couldn’t say who reported it or what they said.
“We didn’t overlook any measures,” Const. Karine Bergeron said. “We sent patrol officers, identity service and the canine unit was also called.”
She says the investigation was wrapped up the same day after police called Hydro-Québec and found out an electrical problem made the sound, not a gunshot.
Bergeron couldn’t say how many officers were dispatched to the scene or whether their guns were drawn. She wouldn’t comment on the racial profiling allegation.
No apology
Smith says he was released without an explanation or an apology.
He and his family reached out to the Montreal-based Centre for Research Action on Race Relations, according to its director Fo Niemi.
Niemi says a lot of people in those situations, especially people of colour, fear getting shot.
“It’s the thought of, ‘My God, if someone is gun happy, or there’s an error, I could end up with a bullet in my body, and that is a very, very stressful thought to have.'”
Family considering legal action
Niemi says wrongful arrests can lead to lasting psychological affects, which can be compounded if police aren’t transparent about what may have happened.
“It’s a lot of shock, and the shock is, ‘How could this happen to me, I haven’t done anything.'”
malik-spaulding-smith
Smith says it’s not the first time he’s felt racially profiled. Two years ago, a police officer pulled him over and said he seemed ‘too young’ to be driving the 2005 Mazda he was in. (Salim Valji/CBC)
Niemi says the family is reviewing the damage caused in the arrest, including a shed door being kicked in, and looking into any legal action they can take.
But in the meantime, Niemi says, if police reach out to the family it could “have a meaningful change in the way the family relate to the police department in the future.”
For now, Smith says the sight of police officers in the area causes anxiety. “This feeling in my body … I get fuzzy, I get hot, I get stressed out.”