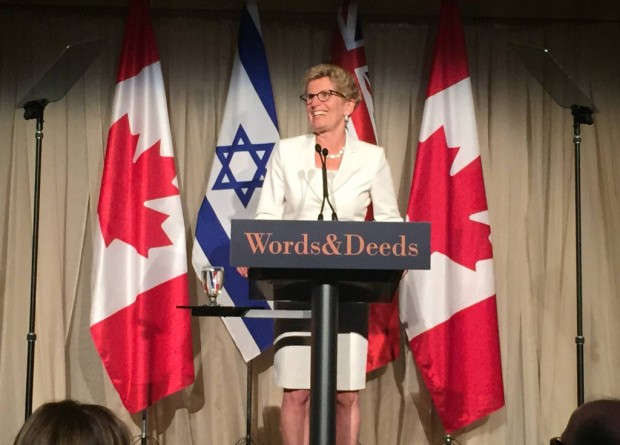 The premier’ Wynne personal popularity rating was far lower than her rivals; Wynne was at 14 per cent approval, 77 per cent disapproval, with 9 per cent having no opinion.

About half of Ontarians do not believe Premier Kathleen Wynne will stick around to lead the Liberals into the 2018 election, a new poll suggests.

The Forum Research survey, which found Wynne’s Grits continuing to lag well behind Patrick Brown’s Progressive Conservatives, revealed 49 per cent think “someone else will lead the Liberals” by the next campaign.

About a quarter — 27 per cent — feel the 63-year-old premier will remain at the helm with a similar number, 25 per cent, unsure.

“They’ve really turned on her, that’s for sure.”

Using interactive voice-response telephone calls, Forum surveyed 1,124 Ontarians on Monday and Tuesday with results considered accurate, plus or minus three percentage points, 19 times out of 20.

The survey, which asked about a “fall 2018” campaign, was conducted before the government’s announcement Wednesday that the next election would in fact be held June 7, 2018.

But Bozinoff said that change in timing is unlikely to affect the results.

Wynne, who has been premier since February 2013, has always maintained she has no plans to step down before the election.

In its monthly tracking poll, Forum found the Progressive Conservatives still boast a massive lead over the governing Liberals — 43 per cent to 24 per cent, with Andrea Horwath’s NDP at 23 per cent and Mike Schreiner’s Green Party at 8 per cent.

The premier’s personal popularity rating was far lower than her rivals; Wynne was at 14 per cent approval, 77 per cent disapproval, with 9 per cent having no opinion.

Horwath remains the best-liked of the major party leaders with 36 per cent approval, 24 per cent disapproval, and 39 per cent unsure.

“The problem here is that none of the three parties has an especially popular leader,” noted Bozinoff.

“Kathleen Wynne has her own troubles, but neither Patrick Brown nor Andrea Horwath can get their approvals higher than about a third,” said Bozinoff, pointing out none of the three is as popular as Prime Minister Justin Trudeau or Toronto Mayor John Tory.

Asked which leader would make the best premier, just 11 per cent of those polled said Wynne.

Wynne will face a different kind of poll Nov. 17 with key byelections in the Liberal stronghold of Ottawa-Vanier and the Conservative seat of Niagara West-Glanbrook.

If the Grits fail to hold the Ottawa seat, the premier could face internal pressure to consider her political future.

Where appropriate, results of the survey have been statistically weighted by age, region and other variables to ensure the sample reflects the actual population according to the latest census data.

Forum houses its complete results in the data library of the University of Toronto’s political science department.