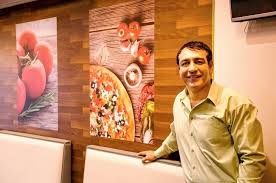 A refugee-turned-B.C. pizza mogul is taking a vocal stance against Canada’s $15-billion deal to sell military equipment to Saudi Arabia.

Ray Russell, the CEO of Freshslice Pizza, announced on Twitter he had sent a letter to Prime Minister Justin Trudeau expressing his hope the government will cancel the upcoming deal, saying it would amount to taking “blood money.”

Freshslice Pizza
@pizzafreshslice
In light of the murder of Jamal Khashoggi by the Saudi Arabian regime, we encourage all Canadians to call on the Federal Government to cancel the contract of military equipment to Saudi Arabia, . Please take action and contact your local Member of Parliament today.

“You don’t have to be a rocket scientist to figure out what’s going on here,” Russell said. “This regime is a brutal regime and we have to do something as a human being, as a Canadian.”

Russell came to Canada from Iran in 1987 as a refugee. He says he arrived with $8 in his pocket and worked hard to build Freshslice Pizza into a multimillion-dollar business. The restaurant chain has over 70 locations across the province.

[If] some people hurt us business-wise, I really don’t care about it and I will not change my mind on that.
– Freshslice Pizza Owner Ray Russell
He said he was compelled to speak out after Saudi journalist Jamal Khashoggi was killed at the Saudi consulate in Turkey on Oct. 2.

There have been conflicting accounts on what actually happened to the vocal critic and Washington Post columnist.

Turkish officials say a 15-man Saudi assassination squad — including at least one member of Saudi Crown Prince Mohammed bin Salman’s entourage — killed and dismembered Khashoggi, whose body has not been found.