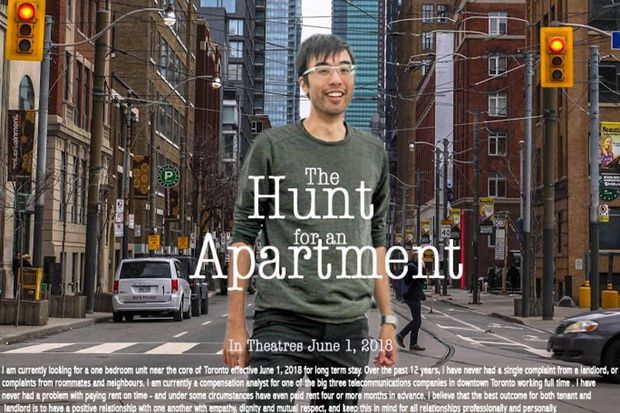 Toronto man creates movie-poster mockup, song in bid to end apartment hunt:
The poster created by Huy Do that helped him secure a Toronto condo.

SHANE DINGMAN
SPECIAL TO THE GLOBE AND MAIL
P

Huy Do had been through the apartment-hunting wringer in Toronto once before and he was willing to do almost anything to avoid the long lines, the unreturned calls and the desperate competition.

The Edmonton native put his marketing degree to good use and planned a social-media campaign built around a movie-poster mockup that made him the star of a one-man rom-com: just a guy standing in front of a city asking it to rent to him.

He also wrote a plaintive pop ballad with keyboard backup set to the Chainsmokers tune Closer: “Closer, to a one-bedroom apartment” – and posted it on Soundcloud: “I’m looking for a condo in the centre of Toronto … $1,300 I can afford, please don’t try to up the cost, though … got no pets don’t need it furnished, got a job I’m working full … in the end it’s all I want, so I just really want a condo.”

The song ended up being unnecessary, after his poster went semi-viral on Facebook (4,000 likes in one case).

“I’ve been waking up with a lot of offers from landlords for me to rent, and real estate agents, too,” he said, a welcome change from his first search four years ago when he couldn’t get an agent to help him on his budget. He says he’s about to close a deal to rent a basement apartment in Leslieville, about 15-minute bike ride from his job at Telus (he’s a compensation analyst). He admits now that the $1,300 price tag was the most important item on his wishlist, along with living on his own, given the Toronto Real Estate Board reported in January the average rent for a one-bedroom condo can rent is now $1,970.

Currently, Mr. Do pays $600 a month to live with five people in a two-bedroom condo (a couple in one bedroom, a single in another bedroom, Mr. Do in the den, with a door that can’t close, and one on the couch). He compares his room to the infamous “coffin apartments” of Hong Kong.

Sadly, he doesn’t think his success is something others will be able to easily copy. For one, the novelty effect helped flip the usual script of a renter seeking a place to one where landlords sought him out: “There’s no way that I can duplicate this in the future, I’ll take it as sheer luck.”

He thinks the other reason it struck a chord was because it reflects how hard it is to find a place in a Toronto rental market with the vacancy rate at a 16-year low and rapidly increasing prices.

“There’s people that are in a lot tougher situations than me. I don’t know how how people can save for retirement, save for a down payment and also pay rent,” Mr. Do says. “I feel like a lot of people are making that sacrifice to be able to live in Toronto … It shouldn’t be one or the other.”

One last thing: To all the folks asking him out for coffee dates – and there have been a lot – sorry. He’s got a long-time girlfriend.