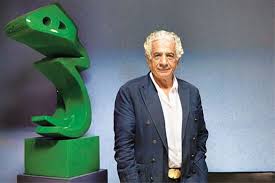 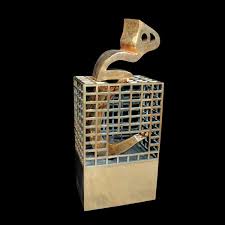 Kevin Griffin 2016
I’ll hazard a guess that the name Parviz Tanavoli isn’t one most Vancouverites are familiar with. Artists in general have a challenging time getting noticed here on the West Coast and if they’re from a completely different culture and historical tradition, it’s even more difficult.

Tanavoli is among Iran’s most famous and accomplished artists. He’s been living in West Vancouver for 25 years since leaving Iran in 1989 so his daughters could attend university in Canada.

Tanavoli has been described as an artist who helped bring modernism to Iran. He’s also an artist whose work has looked back at the incredibly rich cultural history in Iran that predates the arrival of Islam.

I count myself among locals who knew very little about Tanavoli. But after seeing filmmaker Terrence Turner’s documentary about Tanavoli, I have a much better understanding of artist called “father of modern Iranian sculpture.” Poetry in Bronze is receiving its Canadian premiere Thursday at the Kay Meek Centre in West Vancouver.

Turner got the nod for the film when Nezhat Khosrowshahi, wife of Future Shop founder Hassan, saw his previous documentary Adele’s Wish, the story behind the Portrait of Adele Bloch-Bauer by Gustav Klimt. Khosrowshahi was so taken with the film, she gave a copy to Tanavoli.

“He watched it and said: ‘No-one has ever done a film on me. If anyone ever were to, I would like this person to do it.’”

As Turner said, that’s the kind of thing that “never happens” to a filmmaker until it does.

But Turner admitted he didn’t know a thing about Tanvoli – and even less about Iranian art. So a dinner was arranged and Turner met the artist.

“He was just so charming, so intellectual and erudite –the perfect gentleman,” Turner said. “He reminded me so much of Omar Sharif – the Iranian version.”

The documentary is Turner’s “voyage of discovery” about Tanavoli and his place in the history of both Iranian art and contemporary art.

Even with my limited knowledge, I enjoyed Poetry in Bronze because it doesn’t require being an insider with specialized knowledge to appreciate Tanavoli’s accomplishments as an artist. In part that’s because the art experts, curators and artists to talk in plain language about Tanavoli and his work. As well, Tanavoli’s work is so strong it speaks for itself.

Tanavoli talks about his work throughout the documentary. He comes across as a thoughtful, intelligent artist unafraid to describe himself as a poet. His training and approach to art put him in a completely different tradition from many artists in Canada who often seem more likely to think of themselves as social scientists, sociologists and cultural theorists.

As Tanavoli says in the documentary: “I will remain a student to the last day of my life.”

Among those interviewed by Turner are Hank Bull, Vancouver artist, Jessica Morgan, curator of international art at the Tate Modern, and Farah Pahlavi, widow of Mohammad Reza Pahlavi, the former Shah of Iran.

One of the works by Tanavoli featured in the documentary was included in the group show Safar/Journey at the Museum of Anthropology in 2013. Oh Persepolis II (below) is a massive bronze sculpture nearly two metres in height covered with what look like hieroglyphic marks of a language but are in fact invented by Tanavoli. Persepolis is named after the ancient Persian city of Cyrus the Great and Darius I of around 500 BC.

According to Christies, Oh Persepolis II sold to Jumeirah Emirates Towers Hotel in Dubai for $941,000 in 2013; a similar work called The Wall (Oh Persepolis) sold for $2.8 million in 2008. Other works by Tanavoli are in the collections of institutions such as The British Museum in London and the Metropolitan Museum in New York.

Some of his other well-known works include various sculptural iterations of the Persian word Heech (above) which means nothingness. Tanavoli also made beautiful sculptures of hands (above) as an inventive way to refer to the human body because of the Muslim prohibition on portraying human bodies in art.

Tanavoli studied art at the Teheran School of Fine Art and in Italy in the 1950s. He then returned to Teheran where he established a studio that became a centre of modern art in the country in the 1960s.

When I asked Turner why Tanavoli isn’t better known in Vancouver, he said in part it’s because of the Canadian tradition of not promoting local home-grown talent let alone artists who emigrate from elsewhere.

“He’s not naturally a self-promoter,” he said. “He does his thing and lets others discover him. That doesn’t help these days in our culture of self-promotion.”

The evening starts with a question and answer with Tanavoli and Turner at 6:30 p.m. The documentary screens at 7 p.m.

Tickets are $25 each. Proceeds go to the Neekoo Philanthropic Society, a non-profit organization of Iranian-Canadian professionals who raise money to help students pay for their education.

Tags:and Media,Arts,Cyrus the Great,entertainment,Europe,Farah Pahlavi,Future Shop,Gustav Klimt,Hank Bull,Iran,Jessica Morgan,Jumeirah International LLC,Middle East,Mohammad Reza Pahlavi,Museum of Anthropology,Museums,Neekoo Philanthropic Society,Nezhat Khosrowshahi,Omar Sharif,Parviz Tanavoli,Persepolis,Tate Modern,Teheran School of Fine Art,Tehran,Terrence Turner,The British Museum,United Kingdom,Vancouver,Visual Arts,West Vancouver,Western Europe
Reg Davidson works add to YVR art collection of more than 200 pieces
Previous Art Seen post
We encourage all readers to share their views on our articles and blog posts. We are committed to maintaining a lively but civil forum for discussion, so we ask you to avoid personal attacks, and please keep your comments relevant and respectful. If you encounter a comment that is abusive, click the “X” in the upper right corner of the comment box to report spam or abuse. We are using Facebook commenting. Visit our FAQ page for more information.